Have you found Dickens connections in your family tree? 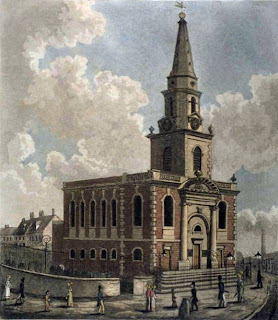 As we celebrate the 200th anniversary of Charles Dickens' birthday today, 7th February 2012, I am reminded of the period of his lifetime, 1812-1870, when my own ancestors were living in London and have been pondering how their own lives must have been during this period.  Did any of them brush up against this famous author, I wonder, or even provide inspiration for some of his characters?

My own gg grandfather Edward Clifford, whom I wrote about in an earlier post, was baptised at St George the Martyr in 1799, along with his sister Charlotte.  Charlotte also went on to marry her husband John Rafter in 1824 in the same church.  These baptism and marriage records can be found either at the London Metropolitan Archives or online on Ancestry's specialist LMA parish register collection.

According to newspaper reports, I  also have various ancestors who seem to have been in and out of the debtors' prisons of south and east London, including the Marshalsea, where Charles' father, John and the rest of the family found themselves living for a period in 1824.  So did they met there I wonder? 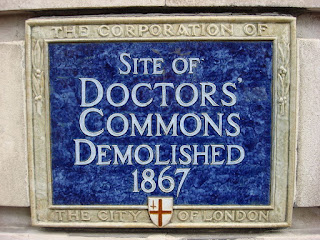 In 1828 / 29, Dickens worked as a reporter for Doctors' Commons, in Knightrider Street.  Doctors Commons, also called the College of Civilians, was a group of lawyers practising civil law in London. It was also the home of the ecclesiastical and admiralty courts which had jurisdiction over marriage licences, divorces and registration of wills, until it was replaced by the Court of Probate Act in 1857.  The building was then demolished in 1867, and these days its original location is marked by a blue plaque, which can be found on the Faraday Building, on the north side of Queen Victoria Street.

My own ancestors, Charlotte and John Rafter, registered the death of her late father, Charles Clifford, for death duty purposes, in 1841, giving her address as 21 1/2 Lambeth Hill, Doctors Commons, London.  So this is another link between Dickens and my Clifford family.

I am still researching my own and my husband's London ancestors, looking for links to Charles Dickens, either in his writing or to places where he lived.  I'm pretty sure I have ancestors who lived not far from Dickens, and have been checking him  out on the censuses as follows:

I am now off to see how close my Londoners lived to these addresses - I must admit they all sound very familiar!
Have you found any connections to Charles Dickens in your family tree?
Rosemary Morgan
London Roots Research

Posted by Rosemary Morgan at 19:48