Spotlight On: The Parish of St George The Martyr, Southwark

I recently wrote a piece on this parish for my PG Diploma, so I thought I'd summarise it here on the anniversary of Charles Dickens’ death, and also start a new "Spotlight On" feature, which I hope to add to in the future.  Of course I won't be covering all of the London Parishes, as that would be too great a task. But I may invite others to write a Guest Post on a parish they know well.
St George the Martyr parish lies just south of the Thames, quite close to London Bridge.  It is adjacent to the other large Southwark parish, St Saviour's, and has a rather strange "boomerang" shape to it.  Until 1900 the parish was technically part of Surrey, although there have always been very close links to the City of London. Indeed the parish grew substantially in the 18th century when the population of the City "overflowed" south of the river, encouraged by the arrival of new bridges over the river Thames.


The map below shows the very unusual shape of the St George the Martyr parish, as well as the names and locations of neighbouring parishes, all of which form part of what was previously Metropolitan Surrey. 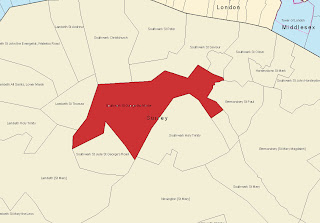 (Original map sourced from http://maps.familysearch.org)
The church of St George the Martyr (pictured below) is often referred to as "Little Dorritt's church", on account of the reference in Charles Dickens' Little Dorritt to her being  baptised there.  This parish is in fact full of Dickens references.  In Victorian times, there were two famous prisons, the King's Bench and the Marshalsea, both located in the parish. Dickens' own father was imprisoned for debt in the Marshalsea, when Charles was just twelve year's old, an experience he retold in his book, Little Dorritt. 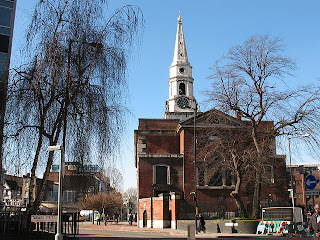 © Copyright Stephen Craven and licensed for reuse under the Creative Commons Licence
The history of the parish goes back to early medieval times, with one of the earliest mentions being when the church was given to the Bermondsey Priory in 1122.  The location of the church of St George the Martyr has not changed - it was originally near the start of the pilgrimage route to Canterbury and was used by pilgrims for prayers before setting off.  The church has been rebuilt a few times, most recently in 1734, although subsequent repairs were carried out following damage in both the world wars.
By the first half of the 19th century the population of the St George the Martyr parish more or less doubled and the parish became one of the most densely populated areas of the country.   According to a report in 1855-1889 by the Metropolitan Board of Works, in the second half of the same century, the population growth was noticeably slower and the type of resident was not necessarily the most desirable, either:


“St George’s maintained a flourishing population of thieves, cheap swindlers and prostitutes.”
Today the parish of St George the Martyr is merely an ecclesiastical parish; the civil parish was abandoned in 1930, having already become part of the Metropolitan Borough of Southwark in 1899.
For those with ancestors who originate in this Parish, family history records are held primarily at the London Metropolitan Archives, with just a few local records held in the Southwark Local History Library.
Rosemary Morgan
London Roots Research

Posted by Rosemary Morgan at 16:34